We started the year well, with a pilgrimage to Allen, Co. Kildare, a spot rich in Catholic heritage.  For us, it is the home place and burial place of one of our founder members - it is a holy and a wholesome thing to remember our debt to deceased members.

At the Hill of Allen we have a traditional residence of Fionn MacCumhail, the son-in-law of King Cormac MacAirt, the greatest of the High Kings of Ireland, who, by a happy inspiration, renounced the Pagan Gods and embraced the One True God, even before the arrival of Saint Patrick.  Sir Samuel Ferguson's poem gives the account:

"Crom Cruach and his sub-gods twelve,"
Said Cormac "are but carven treene;
The axe that made them, haft or helve,
Had worthier of our worship been.

"But He who made the tree to grow,
And hid in earth the iron-stone,
And made the man with mind to know
The axe's use, is God alone."

Anon to priests of Crom was brought —
Where, girded in their service dread,
They minister'd on red Moy Slaught —
Word of the words King Cormac said.

They loosed their curse against the king;
They cursesd him in his flesh and bones;
And daily in their mystic ring
They turn'd the maledictive stones,

Till, where at meat the monarch sate,
Amid the revel and the wine,
He choked upon the food he ate,
At Sletty, southward of the Boyne.

High vaunted then the priestly throng,
And far and wide they noised abroad
With trump and loud liturgic song
The praise of their avenging God.

But ere the voice was wholly spent
That priest and prince should still obey,
To awed attendants o'er him bent
Great Cormac gather'd breath to say, —

"Spread not the beds of Brugh for me
When restless death-bed's use is done:
But bury me at Rossnaree
And face me to the rising sun.

"For all the kings who lie in Brugh
Put trust in gods of wood and stone;
And 'twas at Ross that first I knew
One, Unseen, who is God alone.

"His glory lightens from the east;
His message soon shall reach our shore;
And idol-god, and cursing priest
Shall plague us from Moy Slaught no more."

Dead Cormac on his bier they laid: —
"He reign'd a king for forty years,
And shame it were," his captains said,
"He lay not with his royal peers."

"His grandsire, Hundred-Battle, sleeps
Serene in Brugh: and, all around,
Dead kings in stone sepulchral keeps
Protect the sacred burial ground.

"What though a dying man should rave
Of changes o'er the eastern sea?
In Brugh of Boyne shall be his grave,
And not in noteless Rossnaree."

Then northward forth they bore the bier,
And down from Sletty side they drew,
With horsemen and with charioteer,
To cross the fords of Boyne to Brugh.

There came a breath of finer air
That touch'd the Boyne with ruffling wings,
It stir'd him in his sedgy lair
And in his mossy moorland springs.

And as the burial train came down
With dirge and savage dolorous shows,
Across their pathway, broad and brown
The deep, full-hearted river rose;

From bank to bank through all his fords,
'Neath blackening squalls he swell'd and boil'd;
And thrice the wondering gentile lords
Essay'd to cross, and thrice recoil'd.

Then forth stepp'd grey-hair'd warriors four:
They said, "Through angrier floods than these,
On link'd shields once our king we bore
From Dread-Spear and the hosts of Deece."

"And long as loyal will holds good,
And limbs respond with helpful thews,
Nor flood, nor fiend within the flood,
Shall bar him of his burial dues."

With slanted necks they stoop'd to lift;
They heaved him up to neck and chin;
And, pair and pair, with footsteps swift,
Lock'd arm and shoulder, bore him in.

'Twas brave to see them leave the shore;
to mark the deep'ning surges rise,
And fall subdued in foam before
The tension of their striding thighs.

'Twas brave, when now a spear-cast out,
Breast-high the battling surges ran;
For weight was great, and limbs were stout,
And loyal man put trust in man.

But ere they reach'd the middle deep,
Nor steadying weight of clay they bore,
Nor strain of sinewy limbs could keep
Their feet beneath the swerving four.

And now they slide, and now they swim,
And now, amid the blackening squall,
Grey locks aloat, with clutching grim,
They plunge around the floating pall.

While, as a youth with practiced spear
Through justling crowds bears off the ring,
Boyne from their shoulders caught the bier
And proudly bore away the king.

At morning, on the grassy marge
Of Rossnaree, the corpse was found,
And shepherds at their early charge
Entomb'd it in the peaceful ground.

A tranquil spot: a hopeful sound
Comes from the ever youthful stream,
And still on daisied mead and mound
The dawn delays with tenderer beam.

Round Cormac Spring renews her buds:
In march perpetual by his side,
Down come the earth-fresh April floods,
And up the sea-fresh salmon glide;

And life and time rejoicing run
From age to age their wonted way;
But still he waits the risen Sun,
For still 'tis only' dawning Day. 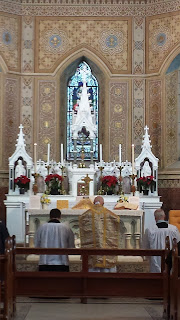 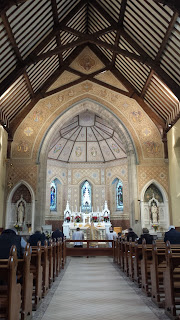 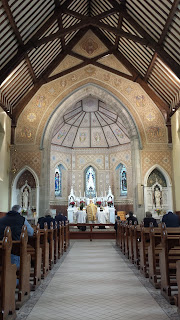 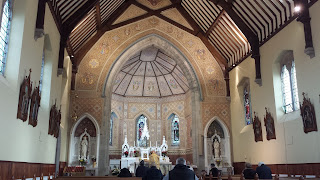 Allen was the seat of the Bishops of Kildare in hiding during the Penal Era.  Bishop Comerford in his Collections quotes from a letter of Bishop Doyle of Kildare and Leighlin from 6th July, 1823:

“I am here placed in the centre of an immense bog, which takes its name from a small hill under whose declivity the chapel and house are built, where I now write. What perhaps interests me most in the wide and vast expanse of the Bog of Allen is, that it afforded, for nearly two centuries, a place of refuge to the apostolic men who have gone before me in preaching the faith, and administering the sacraments to a people in every respect worthy of such pastors. The haunts and retreats frequented by the Bishops of Kildare in the times of persecution are still pointed out by aged inhabitants of these marshes with a sort of pride mingled with piety; and they say-‘There he administered Confirmation; here he held an assembly of the clergy; on that hill he ordained some young priests, whom he sent to France to Spain, to Italy; and we remember, or we heard, how he lived in yonder old walls in common with the young priests whom he prepared for the mission. He sometimes left us with a staff in his hand, and being absent months, we feared he would never return; but he always came back, until he closed his days amongst us. Oh! If you saw him; he was like St. Patrick himself.’ What think you, my dear friend, must be my reflections on hearing of the danger, and labours, and virtues of these good men, and what a reproach to my own sloth, and sensuality, and pride! They of whom the world was not worthy, and who went about in fens and morasses, in nakedness, and thirst, and hunger, and watching, and terror, will be witnesses against me for not using to the best advantage the blessings which their merits have obtained from God for their children. Their spirit, indeed, seems to dwell here, and in those remote and uncultivated districts there are found a purity and simplicity of morals truly surprising. From five to six o’ clock this morning the roads and fields were covered with poor people, young and old, healthy and infirm, hurrying to see the Bishop, and assist at his Mass, and hear his instructions. They thought he should be like those saints whom they had seen or heard of to have gone before him”

Allen was the parish where the famous Father Moore ministered towards the end of that Era and was killed in hatred of his Priesthood on 12th March, 1826, aged 47 years, and where his healing ministry continues at the nearby Father Moore's Well to this day.

The first Mass in the present magnificent Church was celebrated on Easter Sunday, 1872.  Despite being one of the gems of Church architecture in the Diocese - recently magnificently restored - it is barely mentioned by Bishop Comerford, the great historian of the Diocese.
Posted by Pilgrimages Committee at 10:18 PM