The Feast of Our Lady in Spring

Today is known in the Irish Language as Lá Fhéile Muire san Earrach (the Feast Day of Our Lady in Spring) or Lá Theachtaireacht an Aingil (the Day of the Coming of the Angel).

The unequalled love of the Gaelic Race for the Mother of God is woven into the very words of everyday language. Even as the Anglophone will speak of Mary-down-the-street and Mary-the-Ever-Virgin-Mother-of-God by means of the same word, the Gael will call his neighbour Máire and the Immaculate Queen of Heaven Muire.

The Mother of God was a practical part of everyday life, as shown in the traditional Gaelic Milking Song or Cronan Bleoghan: 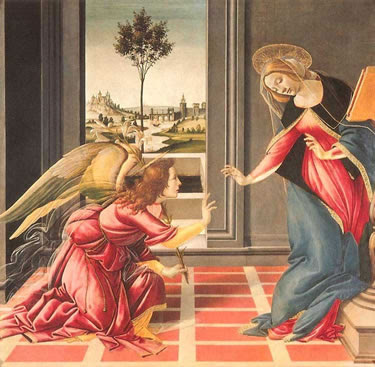 This roughly translates as:

Come, O Mary, and milk my cow,
Come, St. Brigid, and attend her,
Come, St. Columba, the kind one,
And in thy two hands cradle my cow.

Email ThisBlogThis!Share to TwitterShare to FacebookShare to Pinterest
Labels: Our Lady

Among the several daughters of St. Brigid renowned for sanctity stands St. Blath (orse St. Flora) of Kildare. St. Blath is commemorated, if she is remembered at all, on 29th January. She was a lay-sister in the Convent of Kildare founded by St. Brigid.

As cook of the Convent, she earned a reputation not only for her heroic sanctity and her personal devotion to her foundress but also for her cooking. It is said that, under the care of St. Blath, the bread and bacon at St. Brigid's table were better than a banquet elsewhere.

She is recorded as having been born to heaven in the year 523, about two years before the death of the great St. Brigid.

At the risk of a pun or an anachronism, it might be said that St. Blath was the Little Flower of Kildare.

His hair colour, rather than any misdeeds, is the source of his designation 'the black'. This distinguishes him from King Aedh Finn of Ossory, Hugh the Fair, on account of his hair colouring - although his deeds were high and holy too.

The great ecclesiastical historian Colgan recounts King Aedh's abdication about the year 591, whereupon he entered the monastery of Kildare for the remaining forty-eight years of his life.

He went on to become Abbot of Kildare and, from 630 to his death in 638 or 639, he was Bishop of Kildare. c.f. Colgan's Trias Thaumaturga, and the Secunda Vita S. Brigidae, cap. xxxv, ps. 523-4. This is a point of singular interest. Some writers ascribe to St. Conleth, and to the Bishops of Kildare after him, a joint role as Bishop-Abbot. However, St. Aedh is the first of the Bishops of Kildare who is recorded as having held both posts.

O'Donovan, in his Annals of the Four Masters vol. i, pps 256-7 gives the year of St. Aedh's death as 638. Colgan gives his feast day as 4th January and prefers the latter year for his birth to Heaven.