Regarding Clonshambo in the Parish of Kilcock, Dr. Comerford tells us:

Cluain-seann-both, i.e., "the meadow of the old tent or hut"); this parish may have derived its name from the hermit’s cell of one of the saints who made it their abode. St. Garbhan, brother of St. Kevin of Glendalough, was culted here on the 14th of May. In the Life of St. Kevin it is related that at one time he was inclined to wander about as a pilgrim, but St. Garbhan (probably of Clonshanbo) prevented him by observing that "it was not by flying, birds hatched their eggs.

Which of the saints of that name was patron here it is not easy to determine. St. Patrick having preached the Gospel in this locality, gives probability to the supposition, that St. German, Bishop of Auxerre, the great spiritual guide under whose direction our National Saint prepared himself for the future Apostleship of Ireland, some say, for 14 years, others, for so many as 30 years, - is meant. Another opinion is that St. German, nephew of St. Patrick, who helped him in his missionary labours, and was afterwards the first Bishop of the Isle of Man, was the saint honoured at Clonshanbo. There is yet another theory on this subject. In the Life of St. Ciaran of Saighar, mention is made of a holy hermit named Geaman, or Gemman, who is called German by Colgan, and is identical with a bard of that name "who lived in Leinster, near the confines of Meath."

It is related that St. Columba, after receiving the Holy Order of Deaconship in the monastery of St. Finian of Mohill, set out for Leinster, and became a pupil of this Gemman, then advanced in years, and after passing some time with him, he entered the monastic school of Clonard (Loca. Patr., p.298). Between these three the choice seems to lie. The second-name is honoured in the Martyrology of Tallaght, at the 30th of July: German MacGuill."

Regarding Athgarvan in the Parish of Newbridge, he also relates

Father Shearman (Loca Patr. Gen. Tab. 10p.180) surmises that the name of this place may be derived from St. Garbhan (Ath-Garbhan, i.e., “the Ford of Garbhan”), nephew of St. Finnan of Clonard, and kinsman of St. Kevin of Glendalough. This Saint, whose feast was assigned to May 14th, was identified also with Clonshambo, as already stated in the Paper on Kilcock."

St. Garbhan of Clonshambo and Athgarvan, pray for us!
Posted by Conleth at 12:49 PM

We were privileged to be invited to join the celebrations for the 200th Anniversary of St. Brigid's Church, Milltown, Co. Kildare, by organising a Traditional Latin Mass there last Sunday, 9th July, 2017, Fifth Sunday after Pentecost.  The Vestments, Altar Cards and Missal used were those that had been used in that Church for decades and had happily been preserved.  The Rite of Mass was ever ancient, ever new, the Rite that found its home there for 150 of the Church's 200 years.

It was a very special occasion for our own Association too, marking, almost to the day, the 10th Anniversary of Pope Benedict XVI's Apostolic Letter Summorum Pontificum, and the 9th Anniversary of our very first pilgrimage, which started with a Traditional Latin Mass in St. Brigid's after which the intrepid pioneers walked to the nearby Fr. Moore's Well and then across the Curragh of Kildare, St. Brigid's pasture, to Kildare, town of St. Brigid, and finally to her well at Tully.

Many thanks to the people of Milltown for making us so welcome. 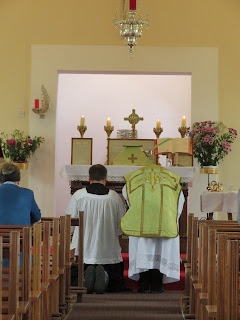 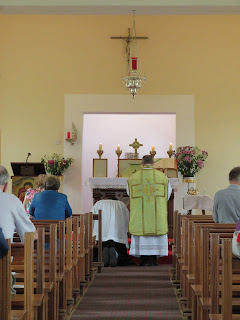 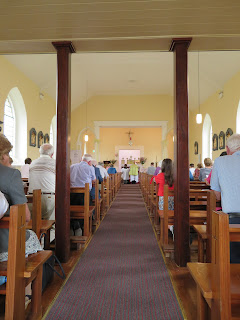 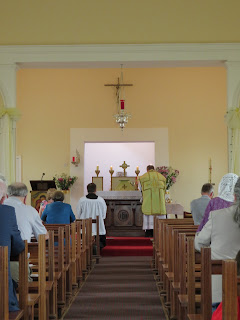 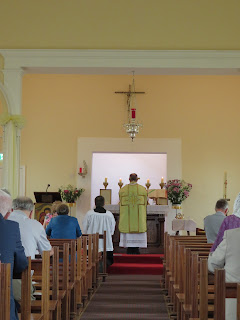 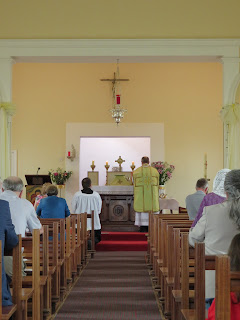 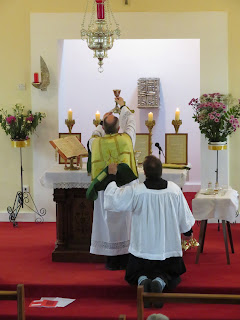 To conclude, and courtesy of the Milltown Heritage Center, this picture of St. Brigid's Church c. 1960, showing the beautiful traditional Sanctuary as it was then. 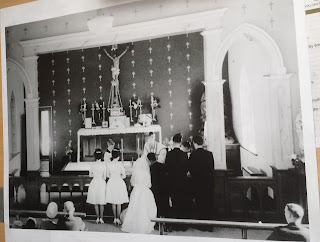