Saint Patrick came twice into Kildare. The first occasion was about the year 448. He came south from Meath, passing through Straffan and Clane to Naas. In Naas, he baptised the local Chieftans, Ailill and Illan, sons of Dunling, and Ailill's two daughters, Mogain and Fedelma. The people of the area having converted to the Faith, St. Patrick appointed his nephew, St. Auxilius, as bishop there with his seat at Kilossy, now Kilashee or the Church of Auxilius, a few miles south of Naas.

Continuing his journey to the south, St. Patrick also placed St. Iserninus and Mac Tail as bishops at Old Kilcullen, in the present-day Archdiocese of Dublin. From there he carried on south, founding a Church at Narraghmore and, crossing the River Barrow near Athy, continued his journey as far as Stradbally, in County Laois and the historic Diocese of Leighlin, and then re-crossed the Barrow to the south and west of Rathangan, coming back into the County and Diocese of Kildare, and passing to the North of Newbridge, where a Holy Well is dedicated to him at Barrettstown, he continued to Allen and Kilcock, carrying on north, towards the seat of the High Kings at Tara in Meath.

Thus, although St. Auxilius is not the founder of the Diocese of Kildare - that honour goes to Saint Conleth - he must rank as the first Saint of Kildare.

Rev. Thomas Walsh, in his History of the Irish Hierarchy, states that:

"It is related that Auxilius, Iserninus, and others, received holy orders on the same day that St. Patrick was consecrated - and from the same bishop; these persons are spoken of as his companions on the mission of Ireland. Whether they accompanied him from Rome, or whether they were selected in Gaul, is not easily determined."

"From this district Saint Patrick went to Kildare, where he laid the foundation of several churches, arranged the boundaries of ecclesiastical jurisdiction, and left the bishop, Auxilius, at Killossy, and the prelate, Iserninus, at Kilcullen. These transactions are supposed to have taken place about the end of the year 443."

"At this period, our Saint held two synods, in which salutary laws relating to morals and discipline were enacted. The first of these synods is entitled 'The Synod of St. Patrick;' the second bears the title of the Synod of Bishops, of Patrick, Auxilius, and Iserninus."

"In the 24th and 27th canons of the Synod, called that of St. Patrick, Auxilius, and Iserninus, it is ordered that no stranger do baptize, or offer the holy mysteries without the permission of the bishop."

"Killossy, called after St. Auxilius, a nephew of St. Patrick, and son of Restitutus, the Lombard, was bishop here, and assisted St. Patrick in compiling the ordinances by which the Irish church was to be guided. St. Auxilius died on the 27th of August, 455."

The Book of Obits of Christ Church gives the date of his death as: xiv Kal. Nov. S. Auxilius, episcopus et confessor. While he does not appear in the Martyrology of Tallaght, his death is found in the Annals of Ulster for 459 and in the Annals of the Four Masters for the year 454:

This translates into English as:

"St. Usaille, Bishop of Cill Usaille, in Liffe, on the twenty-seventh of August.
The Age of Christ, 456. The twenty-eight year of Laoghaire. Enda, son of Cathbhadh, died."

The Great Feast Day of Our Lady in Autumn

Today is known in the Irish Language as Lá Fhéile Mór Naomh Muire san Fhómhar, which is to day, the Great Feast Day of Our Lady in Autumn (or perhaps in Harvest Time).

During the long centuries of persecution, it was necessary for Irishmen to flee from their own country to preserve their Faith and their Culture, a Catholic Gaelic Heritage that was so intimately interwoven that the loss of Christian Gaelic Culture, they felt, would represent the loss of one of the Providential gifts to mankind and to the Church.

They fled abroad to Colleges such as Louvain and Rome, which still maintain links with Ireland to this day. The character of these clerics was not uniform, of course. Many became infected with Jansenism. Discipline was a problem, especially given that one custom was for persecuted Bishops in Ireland to ordain men before sending them to the Continental Seminaries, so that they could support themselves by means of Mass stipends.

One Priest who sought to root out this practice was Fr. Andrew Dunlevy (1680-1746) of the Collège des Lombards, Paris. In 1742, he published An Teagasg Críosduidhe do reir ceasada agus freagartha (The Cathecism or Christian Doctrine by way of question and answer) in order to supply the dire wants of the faithful back in Ireland, who were deprived of Priests, Sacraments, Catholic education and any form of Church organisation under the bitter persecution of English Heretics.

An appendix contained "‘an abridgement of the Christian doctrine in rhymed Irish, composed upwards of an Age ago by the zealous and learned F. Bonaventure Ó hEoghusa of the Order of S. Francis; and also with the elements of the Irish language, in favour of such as would fain learn to read it; and thereby be useful to their Neighbour."

The author mourns that Irish is "on the Brink of Utter Decay, to the great dishonour and shame of the Natives, who shall always pass every where for Irishmen, Although Irishmen without Irish is an incongruity, and a great bull. Besides, the Irish Language is undeniably a very ancient Mother-Language, and one of the smoothest in Europe, no way abounding in monosyllables, nor clogged with rugged consonants ... And there is still extant a great number of old valuable Irish manuscripts, both in publick and private hands, which would, if translated and published, give great light into antiquities of the Country, and furnish some able pen with materials enough, to write a compleat history of the Kingdom; What a discredit then must it be to the whole Nation, to let such a Language go to wrack ..." 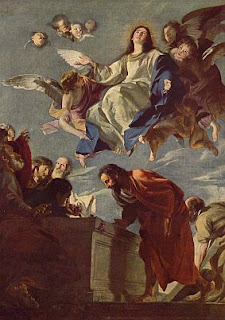 In one section of Fr.
Ó hEoghusa's rhymed
catechism, on the subject
of Faith by Scripture alone,
we read:

That Mary was always a virgin;
That a child should always be baptised;
That Easter falls always on a Sunday,
Where did you read this in Scripture?

May the Gaels of today be worthy of their ancestors and their magnificent Gaelic and Catholic Heritage!